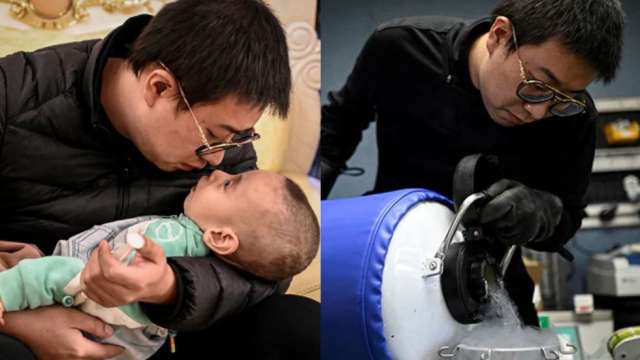 A 2-year-old toddler in China has only months left but his father has left no stone unturned in finding a treatment for his ‘rarest of rare’ ailment. The boy, Haoyang, suffers from Menkes Syndrome, a genetic disorder where body doesn’t properly process copper which is crucial for the development of the brain and nervous system. People with the ailment rarely live beyond three years of age.

The medicine which is found helpful with Menkes was unavailable in China and father, Xu Wei, was unable to fly out and procure the elixir for his son with international borders shut due to COVID-19. Xu, a small-time online businessman with high school education, felt as helpless as a parent would. While most would have given up, he decided to try the impossible and make the medicine himself.

Xu decided to learn everything known about the Menkes Syndrome online. When he found out that a compound called copper histidine would help, Xu Wei decided to set up a chemical laboratory at home. He recalled to AFP, “I didn’t really have time to think about whether to do it or not. It had to be done.”

Xu created the DIY home lab in a gym in a high-rise apartment in southwestern Kunming in China. However, the only medicine that would relieve symptoms of his son’s incurable disease was a complex pharmaceutical procedure. Xu taught himself how to make the medicine through research. His family and friends were against his decision, telling him it was impossible.

Nevertheless, he procured the ingredients copper chloride dihydrate, histidine, sodium hydroxide and water and set about to create copper histidine. The self-taught chemist was able to extract the medicine and then set about ensuring it was safe for his son, trying it first on rabbits and then himself.

His son began to show improvements a couple of weeks after he began the treatment. Xu said his blood reports returned to normal with the treatment. He now administers Haoyang a daily dose of the source of copper that his body is unable to process through his copper histidine medicine made at home.

The Menkes Syndrome is extremely rare and affects one in 100,000 babies. It is seen more in boys compared to girls.