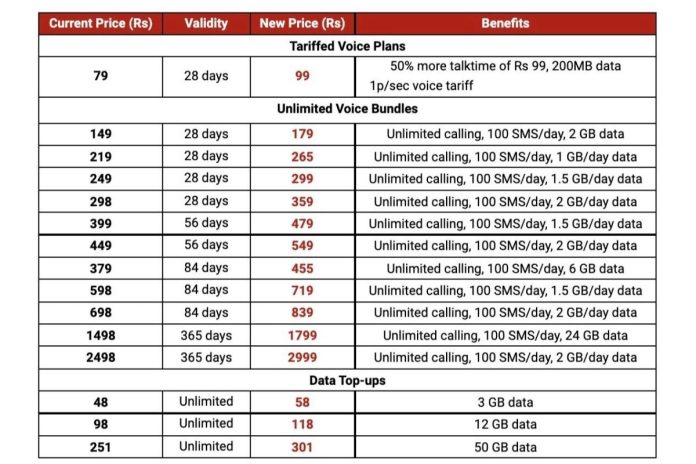 Vodafone Idea (Vi) and Airtel have both recently hiked the prices of their prepaid plans by 20 to 25 percent. While new Vi plans were rolled out on November 25, Airtel’s hiked prices kick in today. Now, the minimum recharges for both Vi and Airtel cost Rs 99 with a validity of 28 days. Both Airtel and Vi have said that they are increasing the tariff in order to increase the average revenue per user (ARPU) and help address the financial stress faced by the industry. With the new prices kicking in from today, let us take a look at how much you will be paying to recharge your Vi and Airtel phones now:

Airtel subscribers will have to pay at least Rs 50 more for popular monthly plans while they will have to pay at least Rs 479 and Rs 455 for plans with 56 days and 84 days validity respectively. The cost of top-up plans has also been increased. The Rs 48 tariff has been increased to Rs 58, the Rs 98 recharge now costs Rs 118, and the Rs 251 top-up costs Rs 301 starting today.