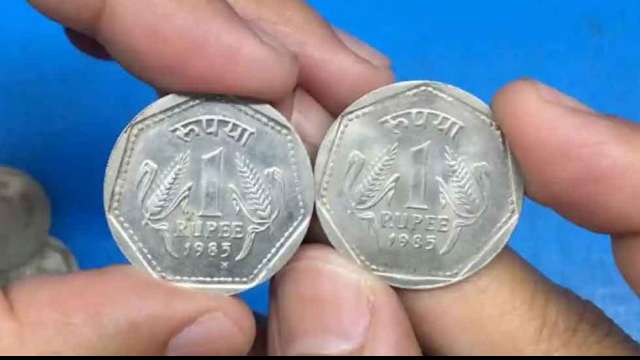 If you are owner of 1985 Rs 1 coin with an H mark on it then you can earn lakhs of rupees. According to reports, Rs 1 coin with H mark and minted in 1985 can be sold for Rs 2.5 Lakh. One of these coins was auctioned at such a high price few years ago.

The Rs 1 1985 coin was released in all Indian coin mints also in some foreign mints. It is to be noted that this design of the coin has been in circulation since 1982 and such coins were last minted in 1991. These coins were minted of ferritic stainless steel and the wight was 4.85 grams.

On these Rs 1 coins, you can see earrings of the corn on one side and the Ashoka Pillar on the other side. You can see India written in Hindi and English on it. This 1985 1 Rupee coin was minted at all four Indian mints and at Llantrisant and Heaton mint in the UK.

Notably, 1985 one rupee coins are not rare and Rs 1 1985 H mark coin is also very common and that’s why these coins will not help you earn lakhs of rupees.The 1985 coin which was auctioned off for Rs 2.5 lakh was rare because it was not issued for public circulation and was a trial oms coin.

OMS means Off Metal Strike and it describes when a coin is minted using a different metal than usual. In this case, the 1985 OMS One Rupee coin which was acutioned for 2.5 Lakh was minted in Copper Only. On the other hand, the other 1985 coins were made in Copper-Nickel.

So, if you are in possession of this rare coin then you can sell it online on Indiancoinmill.com. The website provides a 100% free platform to sell rare and old notes and coins. You need to place your ad on website and the interested customer will contact you by email.