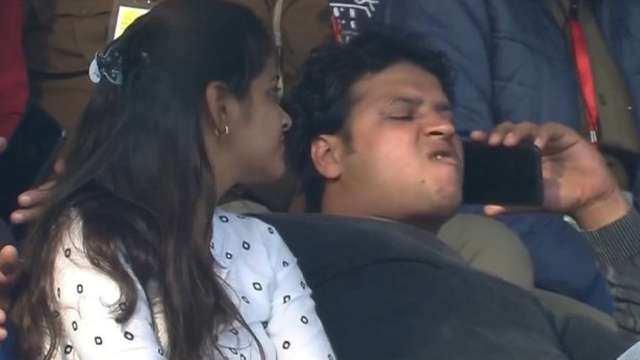 With the full crowds allowed in the ongoing New Zealand tour of India, the fun, frolic and magic of having people live in the stadiums is back. However, this time the viewers at the home had a lot of fun watching a man caught on camera chewing ‘gutkha’ while talking on the phone in the stands in Kanpur during the first Test between India and New Zealand.

Kanpur, being in Uttar Pradesh is infamous for tobacco and pan masala and there have been several jokes and memes on the same. The incident on Thursday gave a golden opportunity to the fans and they didn’t disappoint.

It took place in between the overs on Day 1 after 70 overs were completed. The man was talking on the phone while chewing gutkha when the camera panned onto him. He noticed it later that he was on camera, but the damage had been done.

Former India cricketer Wasim Jaffer came up with a hilarious meme, feeling for the person on the other side of the phone as fans reacted to the same as well. Here are some of them:

Find someone who looks at you like this while you are enjoying Gutkha pic.twitter.com/fkvcyujVeb
— Prithvi (@Puneite_) November 25, 2021

When you don’t need to show the outfield or the stands to guess the venue! pic.twitter.com/fWiSjcWzg2

Why Dhoni will earn less than Ravindra Jadeja at IPL 2022

Not Paris, Hong Kong or Singapore, THIS is the most expensive city in the world