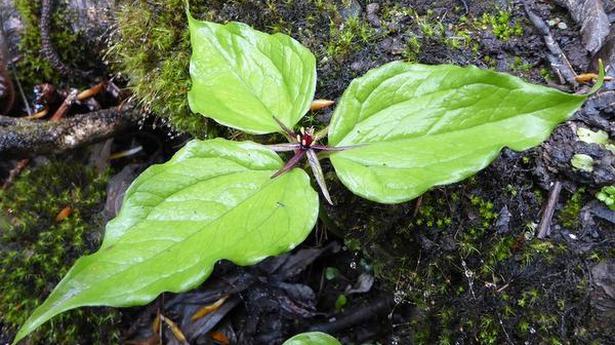 The Himalayan trillium (Trillium govanianum), a common herb of the Himalayas was declared ‘endangered’ by the International Union for Conservation of Nature (IUCN) last week.

In recent years, the plant has become one of the most traded commercial plants of the Himalayan region, due to its high medicinal quality. It has been used in traditional medicine to cure diseases like dysentery, wounds, skin boils, inflammation, sepsis, as well as menstrual and sexual disorders. Recent experiments have shown that the rhizome of the herb is a source of steroidal saponins and can be used as an anti-cancer and anti-aging agent. This increased its market value and has now become an easy target for poachers.

Found in temperate and sub-alpine zones of the Himalayas, at an altitude from 2,400-4,000 metres above sea level, the existence of the plant has been traced across India, Bhutan, Nepal, China, Afghanistan and Pakistan. In India, it is found in four states only- Himachal Pradesh, Jammu and Kashmir, Sikkim, and Uttarakhand. Often called Nagchatri, in local areas this herb grows to a height of 15-20 cm.

“Given the suspected rate of decline and an expected continued demand for rhizomes into the foreseeable future, population declines of at least 50% are expected to occur between 2010 and 2079,” says Harsh Kumar Chauhan from Kumaun University, the member of IUCN-Species Survival Commission who has been studying the plant and helped assess its status for IUCN.

“There are several factors threatening the survival of the plant such as over-exploitation, long life cycle – slow to reach reproductive maturity – and poor capacity for seed dispersal. The highly specific habitat requirement, high trade value, and increasing market demand are all causing its decline,” remarks Anil Kumar Bisht, Professor of Botany, Kumaun University who co-authored the study.

The researchers note that in 2017, the herb was recorded as a medicinal plant traded from India. Since then its price has increased and sold at $50-315 per kilogram.

To prevent its illegal trade, Dr. Chauhan says, “Implementation and enforcement of sustainable collection protocols and quotas are needed. Designation of areas of natural habitat to local communities for management of harvest is the best option to control its illegal trade. Further, the implantation of FairWild Standard (a set of ecological and fair trade guidelines) can help traders, and concerned agencies in the sustainable harvest and trade of the species.”

He adds that educational efforts including elevation of public awareness surrounding the threats to the species, and dissemination of best practices for harvest are also needed.

Mike Pence announces pool of 18 astronauts for next moon missions