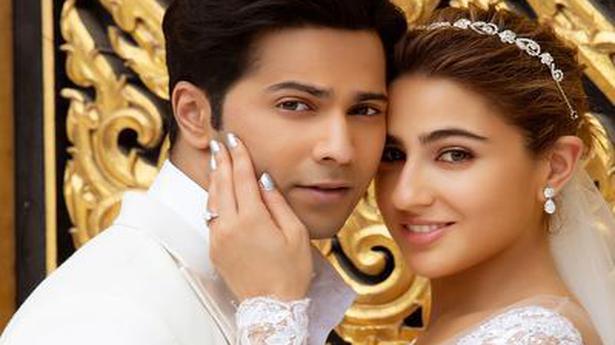 Barring nostalgic value, there’s nothing else going for the new version of ‘Coolie No. 1’

There was an unmatched ease and manic energy with which Govinda pulled off inane comic situations and dance moves in the 1990s. He and director David Dhawan delivered a slew of superhits, often in the company of Karisma Kapoor.

In this remake of the 1995 film of the same name, which itself was a remake of the Tamil film Chinna Maapillai (1993), David Dhawan’s son Varun tries too hard to imbibe but mostly ends up mimicking Govinda’s body language.

Even in the 90s, the plot was outlandish and outdated but we gave in and watched because the lead actors, along with Kader Khan, had a way of making the ‘mindless humour’ work.

The broad plot remains the same, but is dressed up differently. Instead of a bus stand, we see Raju (Varun Dhawan) as a coolie at a railway station. Things take a turn when he meets matchmaker Pandit Jai Kishan (Jaaved Jaaferi) who is seething after the insult meted out by the money-crazed Jeffrey Rozario (Paresh Rawal) who wants only ultra-rich boys for his two daughters, Sara (Sara Ali Khan) and Anju (Shikha Talsania).

Raju is projected as a millionaire heir who is looking to construct a new port in Goa, where Jeffrey lives. Jeffrey and family are hoodwinked easily and Raju gets married to Sara. When he finds himself cornered, the old plot device of a twin comes in handy.

The film is packed with pop culture references. The ‘mere paas maa hai’ line is reworked in the opening portions and later Varun ends up imitating Dilip Kumar, Mithun Chakraborty, Shah Rukh Khan, Salman Khan and a host of others — an exercise of ticking off names from a checklist without actually inducing many laughs. The only laugh aloud moment, perhaps, was Varun sporting oversized welding glasses and commenting that it’s in vogue, referencing Ranveer Singh’s sunglasses.

The Varun-Sara romance happens in many candy-floss settings and some of the original hits are rehashed, with the lead pair trying its best to recreate the dance moves. But where Govinda and Karisma made it look effortless, this duo pales. Sara especially seems weighed down and conscious of comparisons.

One could argue that it’s unfair to compare and the film should be viewed on its intent of catering to the 2020 audience who may not have watched the original. But then, the only driving force of this film is its nostalgic value.

This is a time when Hindi cinema is putting forth out-of-the-box content that’s far from being mindless. The world that makes up the new Coolie no 1 doesn’t manage to suspend disbelief and buy into the comedy. Lines such as ‘what ego ego, you go man’, ‘of the train, by the train and for the train’ and ‘1p.m. one-time baat with the PM’ aren’t even funny. And in 2020, a rich hotelier from Goa who wants to visit his daughter and son-in-law in Mumbai is likely to fly down rather than take the train.

There’s no harm in remaking an old blockbuster for a newer audience but it may have benefited from a more contemporary absurd comedy.