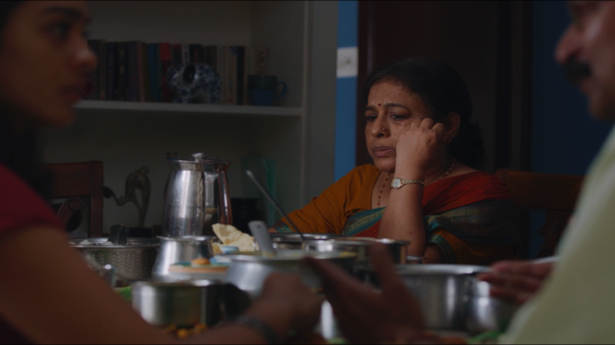 The 25-minute short film, made mostly by a female-crew, explores the fear and resultant trepidation of a woman in her 50s trying to break out of her cocooned life

Let us say, you want to start a small-time business in today’s times. It doesn’t sound as nerve-wracking as it is, right? But imagine the painfully-long process one has to go through, to get the necessary documents signed, especially if it is someone who comes from a slightly “older” generation and who isn’t tech-savvy.

Time freezes around B Selvi (Played by Kalairani…put her into an empty screen for two hours and I’ll watch) each time she takes one step closer to realising her once-suppressed dream — of becoming independent. The first instance when we see time freezing in on Selvi is when she is inside a bank to open a “business account” — the way it is shot, the camera angle seems to suggest that even the frame closes in on her.

The second is when she visits her younger brother for lunch, along with her daughter Kavitha (Gayathrie in a smiling role, for a change). There is a common thread that ties these two instances together. And both ends on a similar note: causing more damage to Selvi’s self-confidence.

As someone who has recently (?) lost her husband, Selvi earns a living by selling handloom saris door-to-door. She has walking all through her life and decides to stand on her own feet, for the first time. She moves her business online by taking orders on WhatsApp.

Wherever she goes, rejection accompanies her like a shadow. First, it is the rejection that comes from the bank; the courier girl, customers who have placed orders, and later from her brother who thinks selling saris is a “hobby”. You feel “paavam” for Selvi, but it is that “paavam” that hurts her the most. That, perhaps, explains why she pushes her supposedly “independent” daughter — who works with an IT firm in Bengaluru — away when she comes to her rescue.

Kavitha is into digital marketing and gives “financial tips for 20-somethings and older women” for virality. Only when she chances upon her mother’s phone does she realise the many rejections she deals with on a day-to-day basis — I liked how Selvi was shown in isolation, with a pop-up message from a customer that read: inexperienced owner. Kavitha decides to “market” her mother’s business venture and helps her take that first, baby steps — I also liked how the song ‘Ae le lo ailasa’ was used (music is by Aditi Ramesh).

The constant wrestling that happens between the mother-daughter duo — in terms of being (in)dependent — is what makes it endearing. In a way, you could argue that it takes a generation for a Selvi to reach the position of a Kavi (“If I get a promotion, I’ll have my own team.”) And that is one hell of a sacrifice. Though the film is about a woman’s aspiration and how little she achieves, thanks to the people she is surrounded with, there isn’t a tendency to vilify anyone for the sake of it, which I found interesting. Take Selvi’s brother, for instance. When she achieves what she set out to, you don’t see his ego hurt. In fact, he stands beside her and quietly cheers. That is a well-balanced perspective.

B Selvi & Daughters (Shouldn’t it be singular? Or does Selvi consider the many girls employed in her business as her own?) is directed by Drishya and has cinematography by Juhi Sharma. I wished they had thought of a better way to establish Selvi’s deceased husband, instead of showing a photograph. I wished they hadn’t stepped out of the film’s boundary when Selvi, well, gets a “mass” moment of sorts. I wished they had thought of a better scene to imply that women are taking over the business, instead of a muted scene where Kavi says to her mother of the “rust” that circles the name board: Bhaskar and Sons. I wished it had explored a little more on the mother-daughter dynamics between Selvi and Kavi — but, hey, it is a short film, after all. And it’s nicely done.

B Selvi & Daughters is available on Cinemapreneur till November 22

‘Bombhaat’ movie review: There’s nothing to rave about this dull, drab...