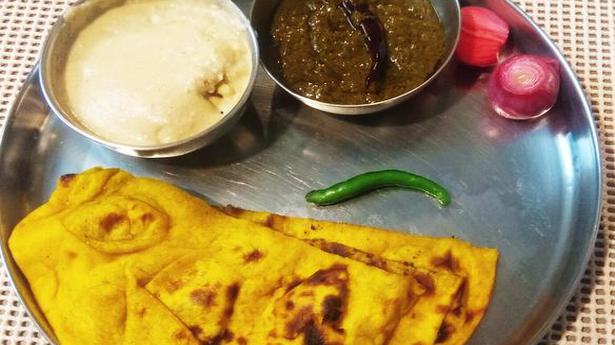 The weather whispered a little word into my ears: saag. And not just any kind of saag, but a dish of mustard leaves. Winter, as we know in the north, is the time for sarson ka saag — that creamy dish that so delightfully complements makkey ki roti — or rotis prepared with maize.

I studied the menus of the little eateries in and around my neighbourhood to see if anyone was known for its saag and roti. Turned out there was one, Baa Bistro, which had the dish on the menu, along with a Rajasthani thhali. I am fond of Rajasthani food, and gattey ki sabzi — a spicy dish of lentil cakes in gravy — is a particular favourite. So I licked my chops and got ready to place my order.

Life is full of little disappointments: It was a rainy night, the delivery agents had called it a day, and I was told that I was not going to get my saag and roti. But, quite like a good hound, once I am on the trail of something, I don’t give up easily. I went back to my research, and zeroed in on an old favourite: a small restaurant called Singla

The food arrived. And it was so good that I called the owner of the shop to find out about the fare. The trick in the greens was that it was simply cooked — it had neither onions, nor garlic or ginger. It merely had a tempering of ghee and whole red chillies. The roti, again, was surprisingly soft. It was not soaked in ghee, but was nicely moist.

I dipped a piece into the saag and popped it into my mouth, and went back to my village, where this was a regular part of our winter fare. I grew up on various kinds of rotis, prepared with millet, maize and gram. There were all kinds of greens too: mustard, fenugreek, and bathua, to name just a few. In the village, of course, a dollop of white butter went on top of the rotis, while the saag was topped with large quantities of ghee. Bliss.

We’d also ordered a plate of malai kofta, and that was a rich concoction of cashew, cream, and paneer. But the saag was what the doctor had ordered (without the ghee of course).

I ordered the saag–roti combo, and the Rajasthani thhali for lunch. The saag was spicy but tasty, and the rotis were thick and firm, the way most makkey ki rotis are. I enjoyed the Rajasthani dishes — especially the hot gattey and the equally spicy mangori-papad ki sabzi. There was a gulab jamun, too, which we shared.

On a cold winter’s day, saag and roti warm up the heart. And a hot and squishy gulab jamun is like the icing — or rather the warm syrup — on top.

The writer is a seasoned food critic