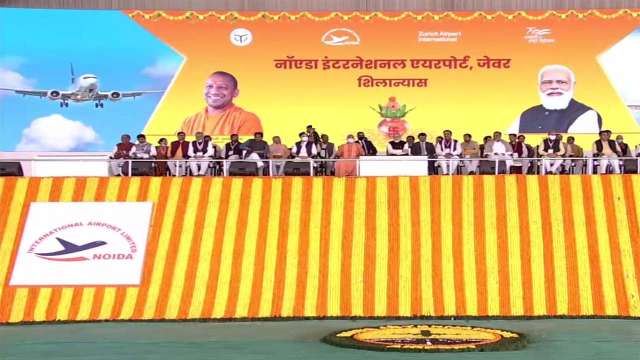 Prime Minister Narendra Modi reached Jewar to inaugurate the Noida International Airport in Gautam Buddh Nagar, shortly. He is accompanied by Uttar Pradesh Chief Minister Yogi Adityanath and Minister of Civil Aviation Jyotiraditya Scindia. After laying the foundation stone of the airport PM Modi said that the Noida International Airport will serve as the logistic gateway of North India.

Addressing the event Union Civil Aviation Minister Jyotiraditya M.Scindia said that the Noida International Airport will be a multi-modal connectivity hub. It will create employment opportunities for more than 1 lakh people. “Soon we’ll see 17 airports including an international airport at Ayodhya in the state,” he added.

On the occasion of the foundation laying of Jewar airport UP CM Yogi Adityanath said, “Some people caused a series of riots here. Today, the country has to decide whether it wants to give new wings to the sweetness of sugarcane here or let the followers of Jinnah run riot.”

The Noida International Airport, also known as the Jewar Airport is going to be Asia’s largest airport. Earlier, taking to Twitter the Prime Minister had said that the project will boost commerce, connectivity and tourism in Uttar Pradesh.

The Jewar airport is among the promises made by the BJP government in its manifesto, which is eyeing a return to power in Uttar Pradesh in the upcoming Assembly elections to be held next year. It is expected that the first phase of the airport will be complete by 2024.