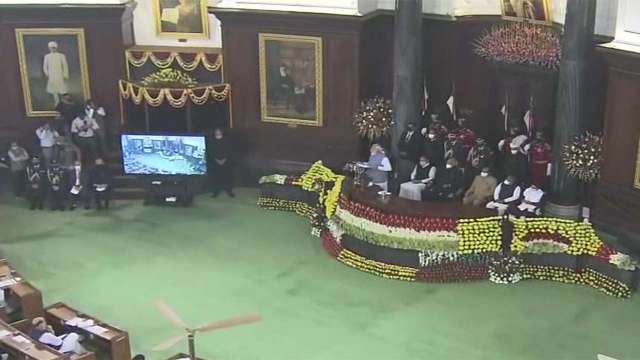 Addressing an event on Constitution Day or ‘Samvidhan Diwas’ Prime Minister Narendra Modi today said that this day is a salute to Parliament, where many of the country’s political leaders brainstormed to give India its Constitution. “Our Constitution is not just a collection of many articles, it is the great tradition of millennia. The unbroken stream is the modern expression of that section,” he said.

He also went on to say that the Indian Constitution which was drafted after many hindrances binds the diverse country and played a vital role in uniting the princely states. On this occasion, the Prime Minister also paid homage to those who died on this day in 2008 in the Mumbai terror attacks.

Constitution Day should have been celebrated each year after 1950 to educate all about what went into the making of the Constitution. But some people did not do so. This day should also be celebrated to evaluate whether what we do is right or not: PM Modi pic.twitter.com/6TXeslcEXN
— ANI (@ANI) November 26, 2021

Constitution Day should have been celebrated each year after 1950 to educate all about what went into the making of it.

The Constitution makes our nation what it is, but we must ask ourselves – today, are we justifying all that our Constitution says?

The Constitution was written by our great leaders and those who fought and got India her Independence.

We must ask ourselves if we are following the Constitution in letter and spirit.

Today, the feeling of ‘nation first’ that is the essence of our constitution has been diminished by politics.

Politics has taken such a priority that the Constitution and its letter and spirit have been overshadowed by it.

Today is the day to pay homage to the long-sighted great personalities like Babasaheb Ambedkar, Dr Rajendra Prasad.

During this ‘Azaadi Ka Amrit Mahotsav’, it is necessary for us to move forward on the path of duty so that our rights are protected.