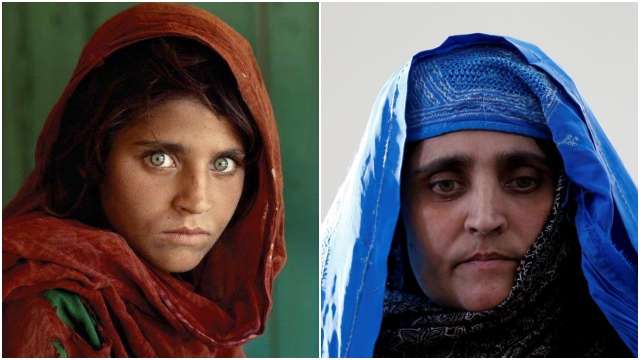 Sharbat Gula, the green-eyed ‘Afghan Girl’ whose 1985 photo in National Geographic became a symbol of the worn-torn country of Afghanistan, has been given refuge in Italy. Gula has asked for help to leave Afghanistan following the Taliban takeover of the country in August.

Sharbat Gula became Afghanistan’s most famous refugee after US photographer Steve McCurry captured her face in a refugee camp on the Pakistan-Afghan border in the 1980s. This picture which later went on to become a symbolic image was published on the front cover of the National Geographic.

Who is Sharbat Gula

Sharbat Gula said she first arrived in Pakistan as an orphan, some four or five years after the Soviet invasion of 1979.

US photographer Steve McCurry took the picture of Gula when she was a youngster, living in a refugee camp in Pakistan.

Her startling green eyes, peering out from a headscarf with a mixture of ferocity and pain, made her known internationally.

Now a widowed mother of four, Gula was 12-years-old and living in a refugee camp when she was clicked by McCurry.

The identity of Sharbat Gula was only discovered in 2002 when McCurry returned to the region and tracked her down.

National Geographic said at the time that an FBI analyst, forensic sculptor and the inventor of iris recognition verified her identity.

She was deported back to Afghanistan in 2016 after she was arrested for living in Pakistan on fraudulent identity papers.

Ashraf Ghani welcomed her back and promised to give her an apartment to ensure she lives with dignity and security in her homeland.

“As a child, she captured the hearts of millions because she was the symbol of displacement,” Ghani said of Gula at the time.

In early September, Rome said it had evacuated almost 5,000 Afghans from Afghanistan after the Taliban seized power in August.