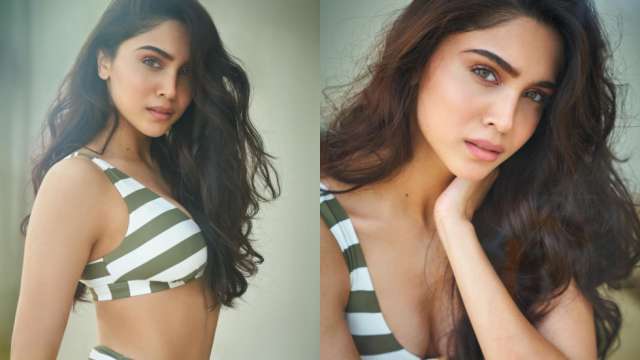 ‘Bunty aur Babli 2’, Sharvari’s debut feature, is yet to be released. The actress, on the other hand, has already secured a place in the hearts of her admirers. Before making her Bollywood acting debut, the 25-year-old assistant director worked on a number of hit films, including Pyaar Ka Punchnama 2, Bajirao Mastani, and Sonu Ke Titu Ki Sweety.

The actress is currently taking the internet by storm with her bold pics. Her daytime outfit consisted of a striped bikini top and bottom combination. She wore it with a pair of dark grey shorts as well.

Sharvari has been paired opposite Siddhant Chaturvedi in the film as they play the roles of Bunty and Babli in the completely rebooted franchise.

Sharvari says, “Bunty Aur Babli 2 is a full masala, popcorn entertainer and I can’t wait for the film to release in theatres! It’s a laugh riot and I’m fortunate that I have got this film as my launch in Bollywood. The script is so brilliantly written that it has given me so many moments to shine and I think and hope I have done justice to those scenes and the film.”

She adds, “As an actor, I have waited patiently for my debut film to release in theatres and that time is coming soon. I have worked really hard to get this film. I know that I have worked tirelessly to deliver good performance and catch people’s attention.”